My next release is a full-length novel in the Grape Seed Falls Romance series. It’s called CRAVING THE COWBOY, and it features a man named Dwayne Carver – does Carver ring a bell? His parents got a short introduction in the novelette, CHOOSING THE COWBOY, which came out last summer. But this year, there will be 6 more full-length novels, starting in February and running through June.

Not only is Dwayne the son of Maggie and Chase Carver from Choosing the Cowboy, but he’s Squire Ackerman’s cousin – remember him from Second Chance Ranch? Dwayne is the owner of his family’s ranch in beautiful Texas Hill Country!

If you missed it, you can read Chapter One of CRAVING THE COWBOY right here! And Chapter Two here, and Chapter Three here. Preorder here for only 99cents.

And read on for Chapter Four!

Dwayne seemed uncomfortable inside his own barns, and he kept saying things like, “We’re gonna get that tack room insulated,” and “Don’t worry about those fences. I’ll get the boys to patch them up,” and “This is the training ring, but we’ll get it leveled before you start.”

He flitted from one thing to the next like a hummingbird looking for the best nectar. His nervous energy floated like a scent on the air, and Felicity wanted to grab onto his shoulders and say, “Take a breath. It’s okay.”

But she couldn’t reach his shoulders without some effort, and she liked walking around the ranch and just drinking in the atmosphere of it. Grape Seed was a bit different from the ranch where she’d grown up. They were larger, with nicer equipment, and a lot more money. Sure, her parents had done okay, and her two younger brothers planned to keep the ranch afloat.

That was about what they did—stay afloat.

Felicity had never minded, because she raised horses from foals and sold them once they were ready to be ridden.

“How many horses do you have here?” she asked Dwayne once he’d seemed to settle on one task—feeding his collection.

“Twenty-nine,” he said immediately. “Some are working horses for the ranch. I guess that would be the goal for all our horses.” He threw her a look over his shoulder.

“Not necessarily,” she said. “Linus and Lucy aren’t working horses.”

Before he could answer, a dog zipped into the barn. His whole body wagged as he trotted over to Dwayne. “Hey, boy.” He handed the hose to Felicity, and she held it in the trough while he scrubbed down the border collie.

“He’s beautiful,” she said as the dog licked Dwayne’s face, causing him to laugh. The sound lit up Felicity’s whole body. She imagined him laughing like that into the hollow of her neck, maybe whispering something sweet just before he kissed her….

“You’re overflowing,” he said, taking the hose from her and moving down the row.

She felt as if someone had ignited a stick of dynamite and tossed it down her throat. She could barely swallow and heat flamed in her face. Maybe if she doused herself with the hose, she’d figure out what was wrong with her.

Nothing’s wrong, she told herself as she took the hose from Dwayne again. He’s attractive. Nothing wrong with being attracted to him.

Though he was her boss, and she wasn’t sure what to do with those feelings of attraction. She hadn’t felt them for anyone in a while, and while she was still in Texas, she felt totally out of her element in this new town, on this new ranch, with all these new feelings.

So she focused on the one thing that wasn’t new to her: taking care of horses.

It was like they were dancing without touching. Without talking. Jinx had flopped in the corner of the barn, his tongue hanging out of his mouth. Usually Dwayne would talk to the border collie, ask him where Atlas was and if he’d seen any of the boys that morning for a bite of scrambled eggs or to play a quick game of fetch.

Of course, the dog never answered, but Dwayne had always felt less lonely if he had a dog to talk to.

“Jinx,” he said. “And I have a German shepherd named Atlas. He’s old, though. Probably snoozing in the shade under my porch.” He forked hay into the feed bin, though there was no horse in the stall. He kept them out in the pastures during the summer, only opening the doors to the stables and barns at night.

“So you don’t live with your parents?”

Dwayne thought he detected a note of interest, but he quickly dismissed the notion. Felicity was beautiful and capable, and she wouldn’t be interested in a man like him. He let his eyes trace the curve of her hip before dropping his eyes to her sexy cowgirl boots. He’d never dated a cowgirl before—had never even thought of it.

Most of the women in town were pretend cowgirls, only wearing the boots and hats to the summer rodeos. But Felicity was the real deal, and Dwayne liked everything he’d seen and almost all of what he’d heard.

“No,” he said. “There’s a guest house on the edge of the homestead. It’s two bedrooms and two baths. I’ve been livin’ there for a while.”

She handed him the hose as they’d reached the end of the line.

“And what do you do in your guest house?” She was definitely flirting with him now.

“You know,” he said, coiling the hose as he went to hang it on the holder. “Make caramel popcorn and sit on the porch with my guitar.”

She giggled, a pretty little sound that wormed its way into Dwayne’s heart. “I didn’t think you could play the guitar with sticky fingers.”

“Sometimes I just hold it on my lap,” he said. Anxiety punched him in the throat. Why had he said that? While it was true, he didn’t want to explain the reasons why sometimes he rocked in his chair, the guitar dormant on his lap, as he stared across the land he owned and loved.

“Something else you’re dabbling in?” she asked. Her dark eyes sparkled, reminding him of black onyx and diamonds.

“You could say that,” he said. “Were you still living with your parents before you came here?”

She nodded, some of her fun and flirt fading. “We all worked the ranch together.”

He noticed the past-tense verb again, but opted not to say anything this time. He nodded, and they finished the chores in the horse barn and the north stable.

“Yeah. Yes, of course.” She folded her arms and gazed up at him. The powerful need to lean down and taste her mouth almost brought him to his knees.

He swallowed and leaned back, trying to control his spiraling thoughts and emotions. “Don’t laugh at the name, all right? I bought him in an auction about three years ago, and the name came with.” He led her to the next stable over, which had a decent-sized pasture attached to it.

He gestured toward the horses clustered in the corner, all of them trying to stand in the bit of shade cast by the building. “The black and white one. See how his hooves look like they’ve been dipped in white paint? That’s Gaston.”

She half-snorted, half-scoffed, but when he cast her a quick look, she sobered.

“I didn’t name him, remember?” He extended his hand over the fence, and Gaston came toward him, thankfully.

The last thing he needed was for his personal horse to behave badly in front of the expert horse trainer.

“But I think his name fits.” He stroked the horse’s cheeks, feeling a new measure of peace infuse his soul. Horses always helped him emotionally, especially after he’d come home from the Marines, which was why he felt such a draw to them.

“He’s proud,” he continued when Felicity didn’t say anything. “A bit stubborn. Thinks he’s the cream of the crop, like all the ladies want him. Then he just hangs out with all these other male horses.” He chuckled like his horse’s behavior was truly unique.

“Gaston.” She reached up and let the horse see her hand before touching his head. Dwayne noted the way she watched the horse, almost trying to size it up before making a judgment. “You’re a handsome horse.”

Gladness filled Dwayne’s heart. For some reason, it was important to him that Felicity like his horse.

“How old are you?” he asked. “Youngest in your family? Oldest?”

“I’m the oldest. Two younger brothers still back on the ranch.”

“Thirty-two.” She shared a smile with him, and his heart dang near exploded out of his chest. “So we’ll start tomorrow with Spotlight and Payday. Deal?”

“Deal.” Dwayne enjoyed a few more minutes with her, then she made her good-byes and headed for that shiny red sports car. He’d never considered owning a car like that—number one, it was too low to the ground. He would never be able to fold his tall frame inside. And getting out was worse.

But Felicity ducked into the car and the roar of a really big engine filled the air a moment later. It was a beautiful mustang, carrying a lovely woman, even if it wasn’t the type of mustang he was used to.

He went about the rest of his day, his thoughts never far from Felicity. As he strolled over to the Cowboy Commons, as Kurt liked to call the row of cabins that flanked the road on the east side, he wondered if he’d be up to the task of training a horse the way she did.

The cabins came into view. Eight of them in all, four on each side of the road, made up the Commons. He and Kurt had repainted them all the color of dark chocolate three years ago, and each cowboy chose the color for their front door. Dwayne’s father had bought whatever colors the boys wanted, and Dwayne passed cherry red, and mint green, and butter yellow.

Each cowboy got their own cabin, and there was a picnic area complete with a flagpole, as if these eight houses had formed a community. The foreman had a slightly larger cabin on the other side of the picnic area, an addition to the ranch his father had put in after a few years of owning Grape Seed Ranch. He was still part of the community, though he was offset just a bit. Dwayne was not, so far removed from this part of the ranch and being the boss.

He got along great with the men, sure. They liked him and respected him. Because Dwayne yearned to be part of something like their community, he came out to the Cowboy Commons often. It had become something and somewhere where he could be himself and belong.

The dust finally settled after Felicity’s departure, and he wondered if she could be the one he belonged to. Belonged with.

“There you are,” Kurt said, his voice on the upper edges of panic as he appeared around the side of his cabin. His chest heaved and he took one, two, three big breaths. “We need you in the bullpens. Tiger’s demolished the north fence, and all the bulls are out.”

He didn’t wait for Dwayne to confirm. Kurt turned and headed back the way he’d come.

Dwayne’s feet slipped a little in the old cowboy boots he hadn’t worn in months. But he got them moving after Kurt, his heartbeat galloping as fast as he knew his stubborn bulls were.

PREORDER CRAVING THE COWBOY NOW FOR ONLY 99CENTS. 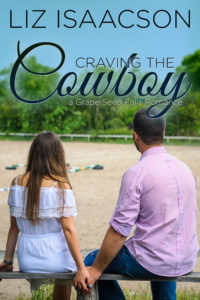 Get notified when a new bite goes up!

A Marriage for the Marine Serial 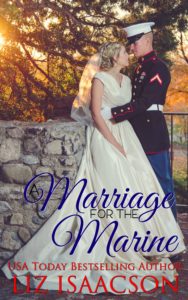